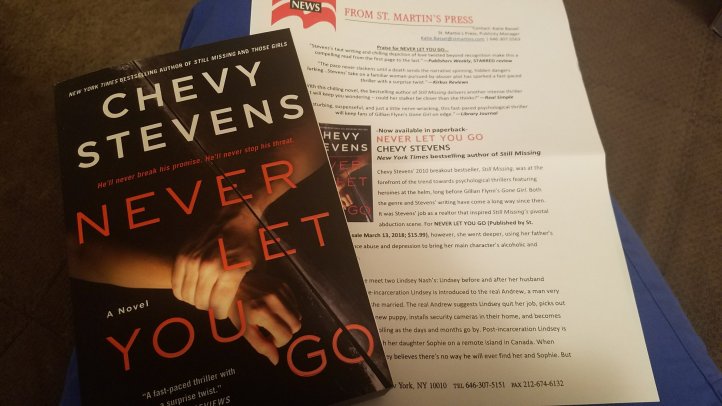 “To spend her life thinking I left her by choice. I would try harder. I would be a better wife. I would make it work. That was over a year ago. Nothing had gotten better.”

The Summary:
Eleven years ago, Lindsey Nash escaped into the night with her young daughter and left an abusive relationship. Her ex-husband, Andrew, was sent to jail and Lindsey started over with a new life.
Now, Lindsey is older and wiser, with her own business and a teenage daughter who needs her more than ever. When Andrew is finally released from prison, Lindsey believes she has cut all ties and left the past behind her. But she gets the sense that someone is watching her, tracking her every move. Her new boyfriend is threatened. Her home is invaded, and her daughter is shadowed. Lindsey is convinced it’s her ex-husband, even though he claims he’s a different person. But has he really changed? Is the one who wants her dead closer to home than she thought?

Our Review:
We absolutely love Chevy Stevens! Her work is so thrilling with twists and turns you never see coming til you aren’t sure what will happen next or who you can trust. Never Let You Go is no different. Lindsey thinks she is free from her past, she has built a new life and has done everything she could to keep her daughter. Then 11 years later her abusive husband is released and due to events Lindsey is unaware of he has found them. When things start happening at her home and work she does everything to protect herself from this danger, but is Andrew the real or only threat…. Will they figure it out in time to save everyone? What is she missing and will she put it all together or will she be blinded by fear and the past?
Chevy Stevens weaves such a story of thrills and turns that you never know where she will take you next but you always know you will be surprised and excited. You keep looking for more around every corner but don’t know where it‘s coming from. But in the end everything fits together in a nice clean package.
Chevy Stevens Never Let You Go is available in hard copy now and paper back on March 13th and can be purchased by clicking HERE