Our Kind of Cruelty by: Araminta Hall @AramintaHall @fsgbooks @arrowpublishing 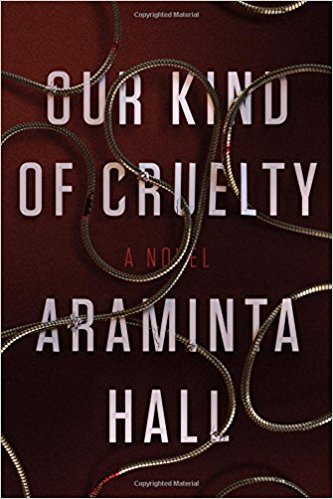 Mike Hayes fought his way out of a brutal childhood and into a quiet, if lonely life, before he met Verity Metcalf. V taught him about love, and in return, Mike has dedicated his life to making her happy. He’s found the perfect home, the perfect job, he’s sculpted himself into the physical ideal V has always wanted. He knows they’ll be blissfully happy together.

It’s all just part of the secret game they used to play. If Mike watches V closely, he’ll see the signs. If he keeps track of her every move he’ll know just when to come to her rescue…

A spellbinding, darkly twisted novel about desire and obsession, and the complicated lines between truth and perception, Our Kind of Cruelty introduces Araminta Hall, a chilling new voice in psychological suspense.

Araminta Hall has knocked it out of the park with this twisted thriller. OUR KIND OF CRUELTY is the kind of book that is so well written you never really know which way is up. Written from the point of view of Mike Hayes and only Mike Hayes, you hear his thoughts and his version of stories and how things are in his world. At times his dark story seems extremely unhinged and that of a very unwell person. Somehow though, at times, Mike makes you believe and almost understand his point of view. Mike weaves a story so convincing you’re just dying to hear from someone else in the story to know what’s real, to get your bearings and get an idea of what direction you are really going. This is truly great writing and a stunning story. This gave me a huge book hangover and I still don’t know what’s actually real. Will definitely be looking for this author in the future.