Talking as Fast as I Can by: Lauren Graham @thelaurengraham 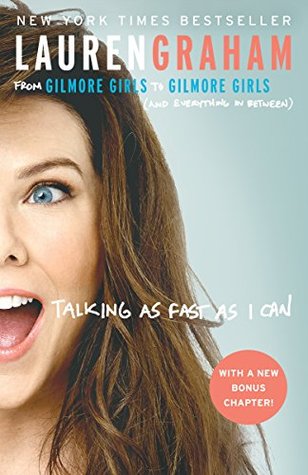 In this collection of personal essays, the beloved star of Gilmore Girls and Parenthood reveals stories about life, love, and working as a woman in Hollywood—along with behind-the-scenes dispatches from the set of the new Gilmore Girls, where she plays the fast-talking Lorelai Gilmore once again.

In Talking as Fast as I Can, Lauren Graham hits pause for a moment and looks back on her life, sharing laugh-out-loud stories about growing up, starting out as an actress, and, years later, sitting in her trailer on the Parenthood set and asking herself, “Did you, um, make it?” She opens up about the challenges of being single in Hollywood (“Strangers were worried about me; that’s how long I was single!”), the time she was asked to audition her butt for a role, and her experience being a judge on Project Runway (“It’s like I had a fashion-induced blackout”).

Some more things you will learn about Lauren: She once tried to go vegan just to bond with Ellen DeGeneres, she’s aware that meeting guys at awards shows has its pitfalls (“If you’re meeting someone for the first time after three hours of hair, makeup, and styling, you’ve already set the bar too high”), and she’s a card-carrying REI shopper (“My bungee cords now earn points!”).

Including photos and excerpts from the diary Graham kept during the filming of the recent Gilmore Girls: A Year in the Life, this book is like a cozy night in, catching up with your best friend, laughing and swapping stories, and—of course—talking as fast as you can.

I must admit I am a huge fan of Lauren Graham! The Gilmore Girls is one of my favorite shows and I have seen every episode many times. There are several shows that I love that I only started watching because they had actors from The Gilmore Girls in them. Shows that include Parenthood, Supernatural, The Resident, and This is Us. The Gilmore Girls is one of my go to shows and of the characters Lauren Graham was always my favorite. The fast talking, quick witted, coffee drinking mother that is Lorelai Gilmore was my perfect character, But Lauren Graham is a fascinating person. In her book Talking as Fast as I Can I learned so much about her life, her childhood and her acting road. Hearing her discussing the Gilmore Girls and what one of my favorite shows actually mean to her and the feelings of coming back. Having her get as excited and emotional over something I was so excited for (the gilmore girls comeback)  made me love her that much more and to be honest had me a bit emotional too. Before this book I had no idea she was a writer I didn’t know all the amazing details about her life. It is a book I’m so glad I took the time to listen to, yes listen to because how do you not choose to listen to the fast talking book. I’m looking forward to reading more by her and I am really hoping she comes back as the amazing Lorelai again really soon.