Mason Cross is the author of the Carter Blake thriller series published by Orion. The first book, The Killing Season, was  published in 2014, and was followed by The Samaritan, The Time to Kill (titled Winterlong in the USA), and Don’t Look For Me.

Mason Cross’s short crime stories have been published in magazines including Ellery Queen and First Edition. His story, ‘A Living’, was shortlisted for the Quick Reads ‘Get Britain Reading’ Award.

The Killing Season was longlisted for the 2015 Theakstons Old Peculier Crime Novel of the Year award, and The Samaritan was selected for the Richard and Judy Book Club for Spring 2016.

Thank you Mason Cross for participating in our Q&A! “Don’t Look for Me” was excellent!

Q- You are a new author to us. Can you tell us a little about yourself? Tell us something few know.

A – I’m based in the UK, even though I write books set in the USA. I have a wife and three kids. Hmmm… I used to deliver pizza at night while I was writing my first novel, does that count?

Q – How many unpublished or half finished books do you have?

A – I have one unpublished book, and a couple of unfinished ones. Someday I might revisit them, but writing a book a year is keeping me busy right now.

Q – If you could live in any fantasy world which one and why?

A – The New York City of the Marvel Universe, specifically in the 80s.Obviously, it’s closely based on a real place, but the authentic real-life details mixed with the fantastic subject matter make it my favorite fantasy world.

Q – I love quotes! Can you tell me a favorite quote of yours?

A – “The streets were dark with something more than night.”

There are loads of great Raymond Chandler quotes, but that’s one of my favorites.

Q – What is the best advice you ever received in life?

A – Finish things. All writers get to a point when writing a story or a novel or a script where they think it’s total garbage. That’s the point where most people give up. If you grit your teeth and keep going, you can usually take a look at the finished draft and find ways to make it better.

Q – What book do you wish you had written? Why?

A – Maybe Gillian Flynn’s Gone Girl, it’s just such a brilliant psych thriller. And it sold pretty well too, which doesn’t hurt.

Q – What is your ideal reading environment?

A – My office is an attic room of my house. I have a big green leather couch on one wall, just underneath one of the windows. That’s my ideal reading spot.

Q – How do you choose the names of your characters? Where did the idea for Carter Blake come from?

A – I can’t remember where the name Carter Blake comes from, but every time he needs to use an alias in the book, he picks the name of a comic book writer or artist. Other names I just pick up from cool names I’ve encountered in real life.

Q – What is something you would want your current fans and future readers to know?

A – That I’m going to keep writing books as long as people keep reading them – the next one comes out in the UK in April, it’s called Presumed Dead.

Q – What hidden secrets can you reveal about your new book?

A – The one that’s just been published in the USA, Don’t Look For Me has a hidden “Easter egg“. At one point in the story, a character finds an email address. The address works, and if you email it, you get an extra feature. 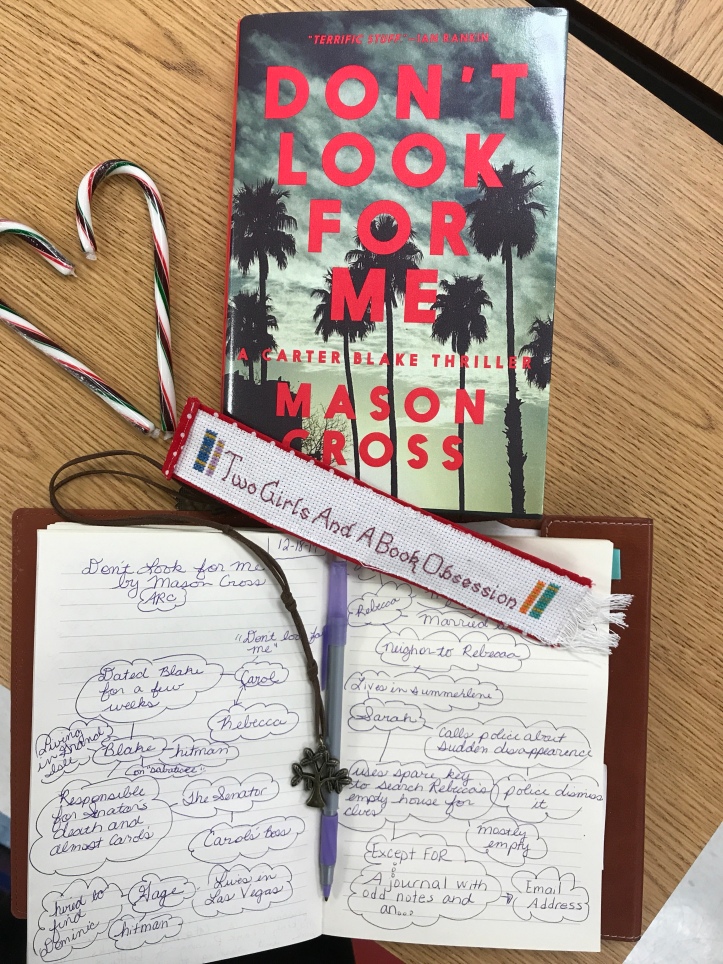 What other amazing authors have said about Don’t Look for Me..

“Mason Cross is a thriller writer for the future who produces the kind of fast-paced, high octane thrillers that I love to read.”
– Simon Kernick

“A classic wolf-in-sheep’s clothing story,
The Samaritan  is gripping”
– Richard and Judy

“Combines an adrenaline rush plot with one of the best new series characters since Jack Reacher.”
– Lisa Gardner