Jacqueline Smith was born and raised in Dallas, Texas. She attended the University of Texas at Dallas, where she earned her Bachelor’s Degree in Art and Performance in 2010. Two years later, she earned her Master’s Degree in Humanities. Along with writing and publishing, Jacqueline loves photography, traveling, and nature.

Q. What are some writing habits that might seem unusual or unconventional to someone else?

A. Ooh, that’s a good question!  I guess the first thing that comes to mind is that I’m a total pantser (as opposed to a plotter).  Whenever I get a new idea for a book, I do what I call a “brainspill.”  I open a new Word document and write out everything that’s in my head with no regard for punctuation or organization.  That’s about as much “plotting” as I do.  I prefer to start writing immediately and let the story lead me where it may.

Q. What secret talent do you have?

A. I can pogo stick.

Q. Have you ever found yourself in a similar situation as one of your characters or are the events fabricated?

A. Yes, actually!  It was really weird.  I found myself having to keep a secret very similar to the one that Mel keeps in the second Boy Band book and like her, it ate me up inside.  In fact, the guilt dream that she has in the book is based off of a guilt dream that I had in real life.  It was so strange that it was going on at the same time.

Q. Spicy food or mild?  What are your favs?

A. Mild, for sure!  I could eat pasta and baked potatoes every day.

Q. Can you tell us something that’s on the top of your bucket list?

A. It used to be parasailing, but I actually crossed that one off this year!  Something that’s always been high up on the list has been to get more involved in environmental and wildlife conservation efforts.

Q. Who is your most memorable grade school teacher and why?

A. My first grade teacher, Mrs. Roberts.  I’m still in touch with her today.  She was just so wonderful and she really cared about her kids.  She’s also the one who discovered that I couldn’t see and needed glasses.  Also, my fourth grade teacher, Mrs. Harper.  She really helped influence my love of reading and books in general.  She used to read a lot to us, books like Where the Red Fern Grows and Danger on Panther Peak.  I remember being mesmerized and enthralled by the idea that simple words on a page could have such a powerful effect on my emotions.

Q. Who is your favorite cartoon or Disney character? Why?

A. Oh my goodness, I love Disney.  I love Disney so much. This is so hard.  But I’m going to have to go with Ariel.  She was my hero as a kid.  I loved the ocean and I could always relate to her because I was a bit of a fish out of water.  I was the weird kid who was interested in things that no one else was interested in. And I really, really wanted to be a mermaid.

Q. If you could speak with a totally different accent for the day, which would it be and why?

Q. What was the inspiration for your first title “Boy Band”?

A. My first title was actually Cemetery Tours!  But as for Boy Band, it began as a NaNoWriMo project!  If my friend hadn’t talked me into signing up for it, Boy Band probably wouldn’t exist, which would be a real shame since it was so much fun to write (and hopefully it’s fun for people to read!).  Anyway, my sister and I are huge fangirls at heart.  We love music, bands, concerts, music videos… The night I decided I was going to participate in NaNoWriMo, I watched the “Best Song Ever” music video by One Direction and I thought, “They’re so adorable.  I bet they’re so much fun to hang out with.”

Q. What do you want your fans to know most about you?

A. That nothing makes my day quite like they do.

Thank you so much Jaqueline E. Smith! We had a blast getting to know you and reading Cemetery Tours! We highly recommend your book to YA readers (young and old alike)!

Hope you enjoy our Q&A’s! Please follow our blog for more Q&A’s and reviews! 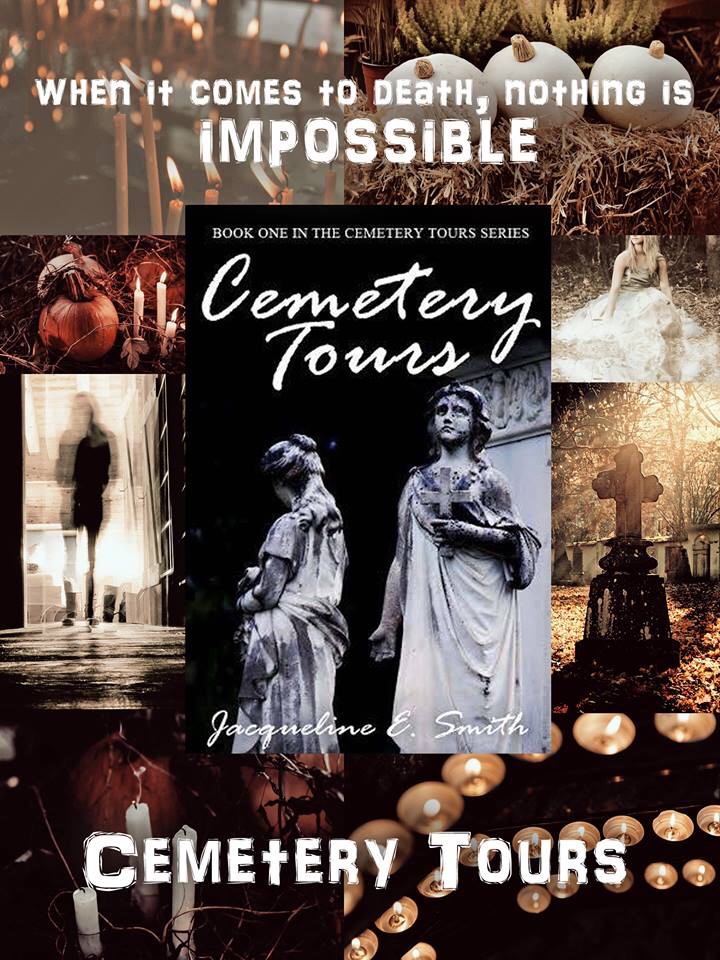